Metal Mind Productions will reissue DIAMOND HEAD's classic albums from the early '80s — "Borrowed Time" (1982) and "Canterbury" (1983) — on October 15 as limited-edition digipacks (limited to 2,000 copies) featuring bonus tracks. The details are as follows:

Gaëtan
Defender of the Faith

Jesus Christ!!! when did this happend?! Godddamn it, i hope i can find it nowdays!!!


One of the most remarkable talents to rise out of the NWOBHM, DIAMOND HEAD’s legacy still ranks among the most influential of the genre, with both MEGADETH and METALLICA citing the group’s influence on them.

Indeed, Diamond Head’s 'Am I Evil?' has been a staple of Metallica’s live shows for many years. Sounds magazine’s metal editor Geoff Barton once remarked that “there are more good riffs in your average single Diamond Head song than there are in the first four BLACK SABBATH albums.” Such lavish praise had been sparked by the band’s unassuming, independently recorded first album (later commonly referred to as the White Album or Lightning To The Nations), which by all rights should have been just the first step on the road to a legendary career.

Diamond Head were formed in Stourbridge, England in 1976 by schoolmates Brian Tatler and Duncan Scott. They quickly recruited Sean Harris and a few months later Colin Kimberley. Having already received euphoric responses to their first album, Diamond Head were quickly signed by MCA and a lengthy tour ensued. They were soon back in the studio to record a second album, Borrowed Time and, by the time they split in 1983, a third, Canterbury, had been recorded.

This double CD of BBC recordings combines the band’s In Session and In Concert recordings on one CD for the first time. The set culminates in the Milton Keynes Bowl show, the night they opened for Metallica in 1993 and includes their Reading Festival set from 1982, described by the band as “the peak of their career… as good as it got”.

Liner notes are provided by Diamond Head’s very own Brian Tatler. The release is set for August 2nd via Universal.

Metal Knight
Guardian of the Flame

Metal Knight
Guardian of the Flame

Bertrand
Guardian of the Flame

Lightning To The Nations (The White Album) [Remastered 2021] tracklisting:


Diamond Head are of seminal importance to heavy metal music, and their debut album Lightning To The Nations is a key influence on the genre.

“We wrote instinctively,” explains co-founding member and riff lord Brian Tatler. “We had an undeniably unique sound. Four young lads, each with an element that, when combined, produced an alloy that was our own heavy metal sound.”

Lightning To The Nations (The White Album) [Remastered 2021] is the ultimate version of this ultimate album, which is set for release via Silver Lining Music on September 30. The release will feature not only the original album from ¼ inch master tapes which Lars Ulrich helped Brian Tatler retrieve back in 1990, but also alternative mixes of classic cuts “Lightning To The Nations”, “The Prince”, “Sucking My Love”, “Am I Evil?” and “Sweet And Innocent” never publicly released (or heard) before. There is also brand-new cover artwork based on an idea Brian Tatler had, to show a character referred to as ‘The Lightning God’.

“In 1990 as a celebration of the tenth anniversary of the NWOBHM, Lars Ulrich and Geoff Barton compiled the double album ‘New Wave of British Heavy Metal ‘79 Revisited’ which came out on Phonogram Records. It was Lars who made it his business to track down wherever possible the original master tapes because all he had were the old, often scratched singles,” recalls Brian. “He told me that he would often call up members of the bands they wanted to feature on the album and the confused guy on the other end of the phone would assume it was wind-up. ‘Who? Lars Ulrich? From Metallica? Fuck off!’ When Lars called me, I explained that the original ¼ inch masters for ‘Lightning To The Nations’ hadn’t been seen since they were sent by our old manager to a guy called Horgi at Woolfe Records years back. Apparently Horgi didn’t return the tapes, so Lars dispatched someone from Metallica’s German label to pay the guy a visit… The tapes were duly returned and after Phonogram had finished with them, Lars made sure they came home to me. I still have them stored safely.”

The original tapes were first quite literally baked (a process which allows degraded tape to be returned to playable quality), then restored and digitized before Diamond Head frontman Rasmus ‘Ras’ Bom Andersen remastered the tracks, ending up with a pristine edition of the original recordings and the recently discovered alternative mixes. Pure treasure for all fans of both Diamond Head and the New Wave of British Heavy Metal, the restored masters are supplemented by a set of bonus tracks originally recorded in 1980s. Rounding-out this ultimate edition are a set of deep and detailed notes on both the era and each song by Brian Tatler.

“I don’t really know what inspired ‘Lightning to the Nations’, says Tatler in his notes. “I can't think of any other song by any other band that sounds like it and that's a hell of a claim. Sean got the title from a painting he had seen in an art book somewhere and thought it would make a good title for a song. Once we had the song and it became track one, side one, it seemed like a good album title too. It’s still in the live set after forty-years.” 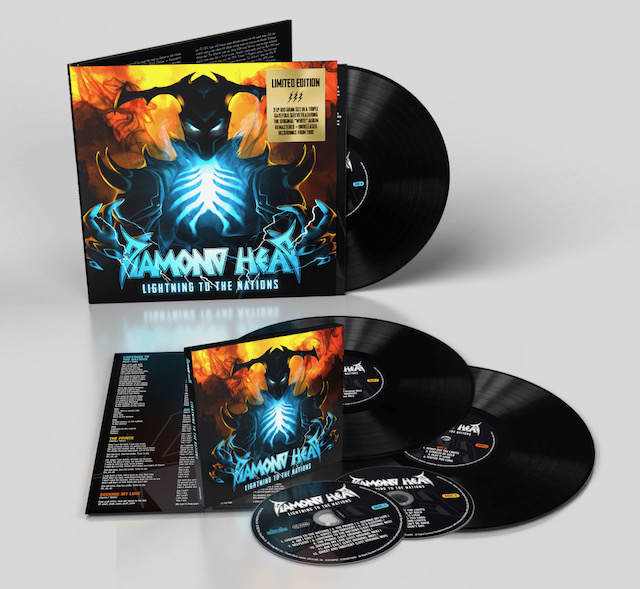 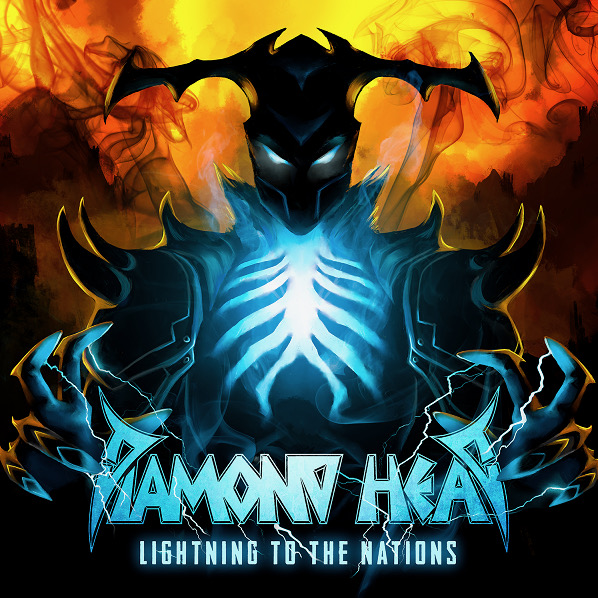